Follow-up of my previous articles (first, second, and third) about my experience hosting a robotic class in a junior high school. Here is a little wrap-up of the fourth session.

For this session, I opened the activities in different directions by proposing new hardware to play with (remote control and led matrix) and leaving the groups full choices on what they wanted to program. The deal was let them build/program whatever they wanted and show it to the other groups at the end of next session. So this session was the first part of a double session.

Kids have been asking to get the remote controls since the first session. I kept them until today because I was afraid that the class would quickly turn wild with kids driving their robot all around the room. Of course, that’s pretty much what happened! The first thing they had to do to use the remote control was to reset the program on the board to default one so that they could use the arrow to drive the robot. Then I told them they could reprogram each key of the remote. That caught their attention and most of the group seemed to enjoy triggering things with the remote (nicer than triggering by pushing the on-board button).

Fixing the Led Matrix on the Robot was fun for all the groups because it was an opportunity to use again the screwdriver! Almost to quick and easy to do, but fun anyway. They the “draw on led matrix” action was very successful because it allows to draw your own custom image on the matrix. This feature is similar to the “draw sprite”one in Scratch using the Paint Editor.

Using both the remote control and the led matrix, several groups ended up this session with program showing different drawings on the matrix depending on the key pressed on the remote. Let’s see what they come up at the end of the next session.

Follow-up of my previous articles (first and second) about my experience hosting a robotic class in a junior high school. Here is a little wrap-up of the third session.

This session was a bit more successful than previous one I think. This time I assigned them a broad goal of “playing around” with the motored wheels of the robot (which is what they wanted to do from day 1!). I could not resist preparing a single sheet of paper with some instructions on the different steps they could follow that I gave to each group. For example the first steps were:

Most of the kids followed this guidance and were able to reach some satisfying results. Important to note that although the group was only made of 12 people, it was of great help that I came with a colleague to help me manage the session!  An interesting lesson from this session is the common programming mistakes kids did.

The most typical error is to write an event-driven program without an event-waiting loop : 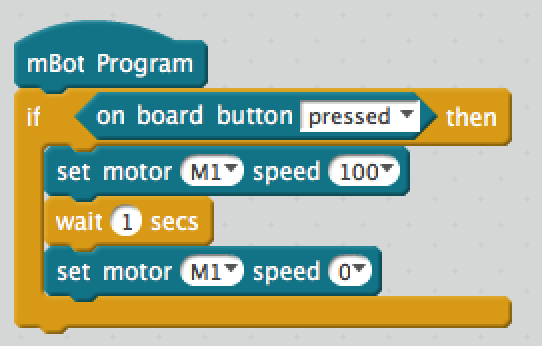 So here, the resulting program does…. nothing! The “if” is done immediately (and most probably the button is not yet pressed), and then it’s over. The solution is to surround the “if” with a “forever” loop: 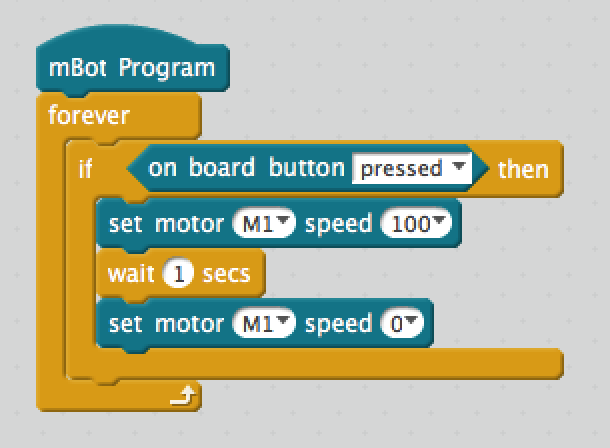 This error is sort of satisfying at first because it allows to explain the whole “computer is dumb and only do what you ask it to”, but it’s a bit untrue to say that nowadays to a young programmer because, well, computer is super smart is does A LOT for us. We just have to assemble colored bricks to have a robot move, so why this “forever” loop should not be included in all this framework? The “computer does only what you tell it to do” sounds true only for those who did some assembly language…

The second most typical error is to write an series of statement that are changing the state of the machine, but without waiting between each statement:

Here the user might expect to see blinking led, but they won’t see it because the program will execute too quickly for a human to see it. So here the solution is to add some wait command between each change of state: 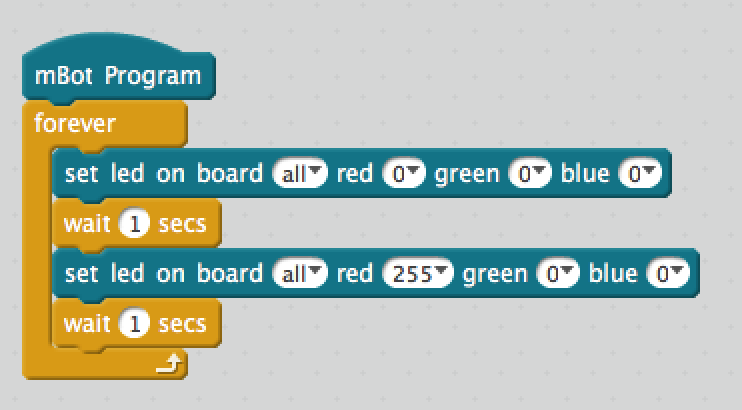 Once the kids had those 2 fundamental rules in mind (looping and waiting), they were able to make some good progress!

Follow-up of my previous article about my experience hosting a robotic class in a junior high school. Here is a little wrap-up of the second session.

When I was preparing this second session, I started to write a little memo of the things I wanted to share (a mix of a recap of last session and theoretical introduction!) and some exercise ideas (and proposal of solutions). So I came up with this mini-lesson : 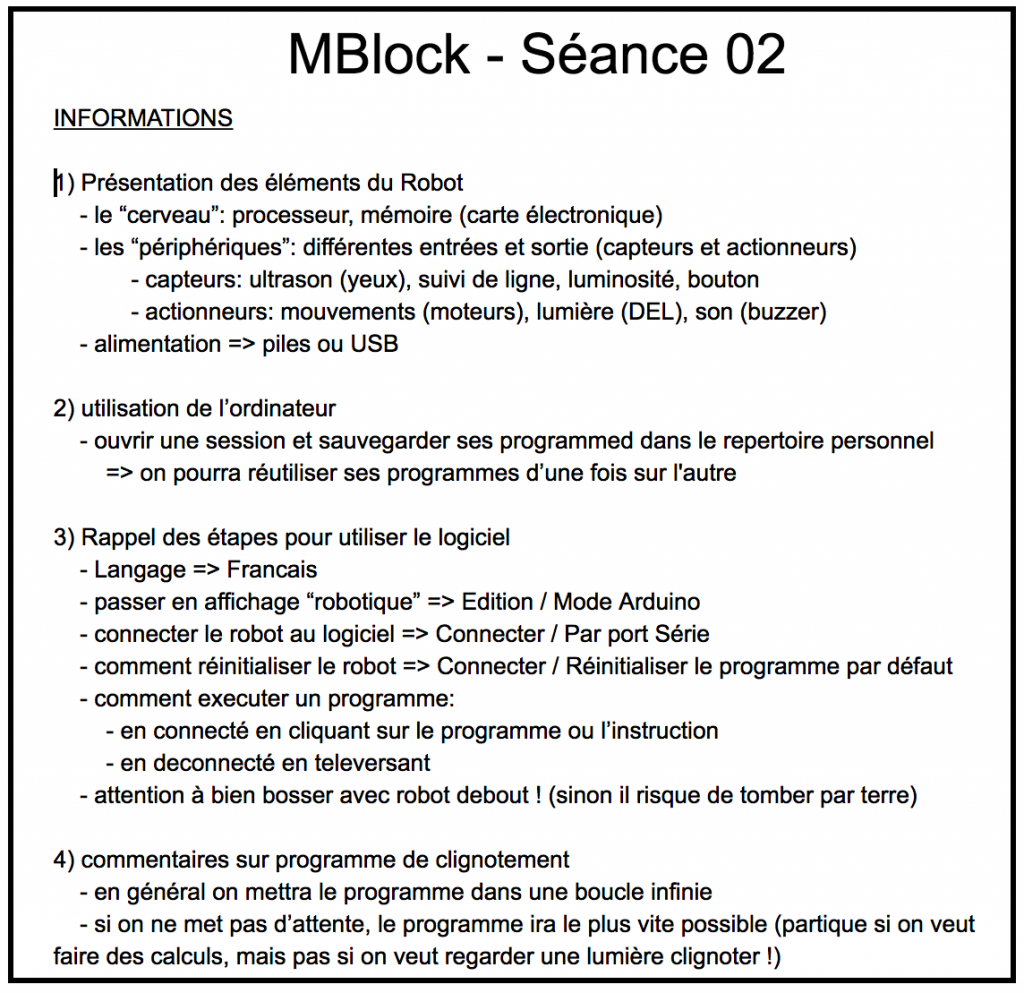 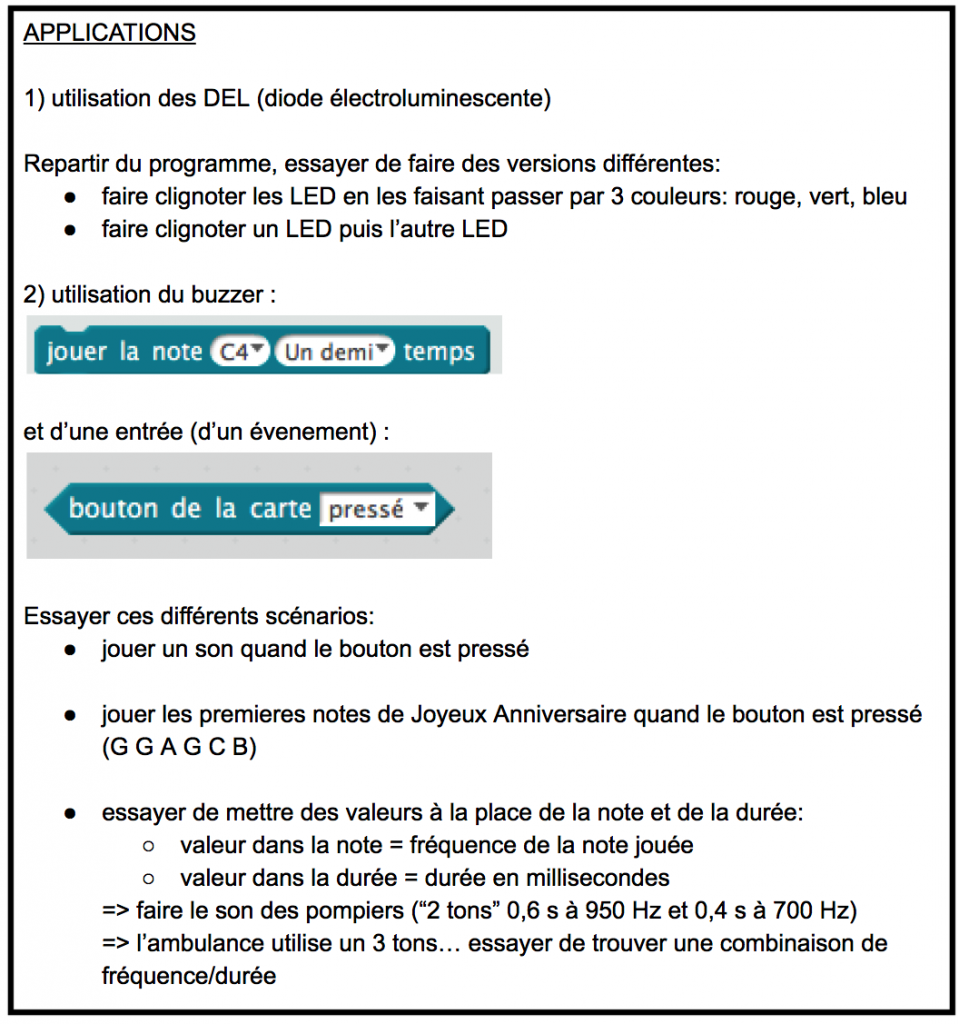 I printed a dozen copies and came to the class with my stack (and some pride!). I probably dared to picture a group of 12 kids reading the document while nodding in approval and then getting on their machine to execute some of my proposals… 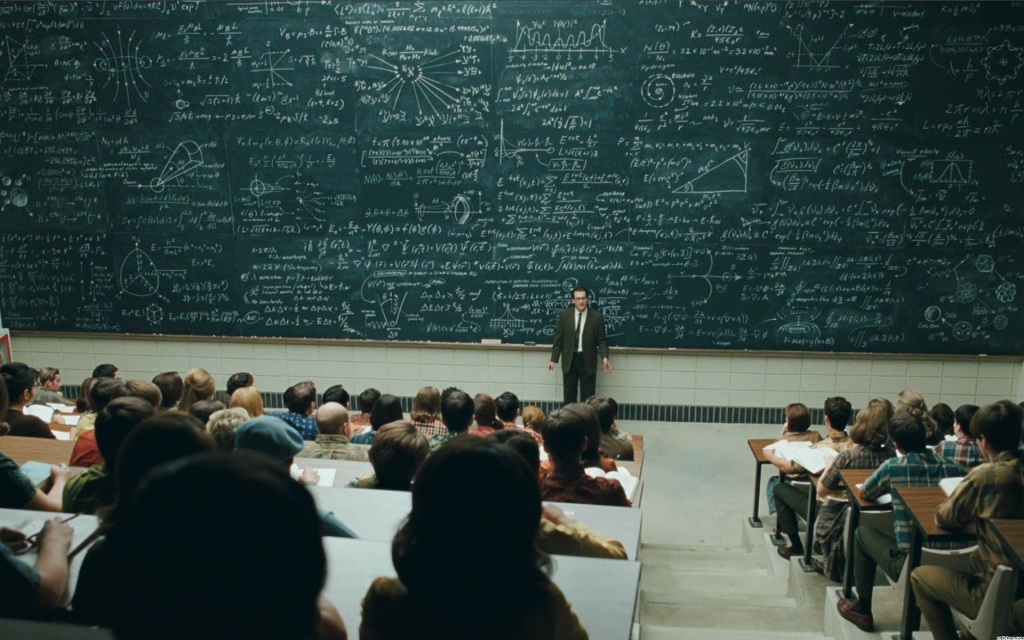 Of course this scenario did not happen at all! The attendees were very excited to see their little robot again (after 2 weeks break) so all they wanted to do was start tinkering with them! After 1 minute most of them were already starting to program and not paying any attention to my little speech about what are the robot “inputs” and “outputs”. So I tried to be as concise as possible and essentially gave up with a “ok, go ahead and enjoy”.

Obviously the top-down approach I came up with was not the right one. The essence of this sort of class is to give some tools to a group and let them play, discover, assemble, dissemble etc. That’s quite demanding for the host though because everybody will react differently and answering to their unique/unexpected requests (I am trying to do X and have this problem) will be more complicated than just giving hints for a problem that was asked to the whole group.

Main question I am fighting with about this all pedagogy topic is if I should hope to reach some milestone in term of knowledge or achievement where I could stop and say “ok, now we’ve understood, as a group, the concept of variables/loops/whatever”. Probably not needed. 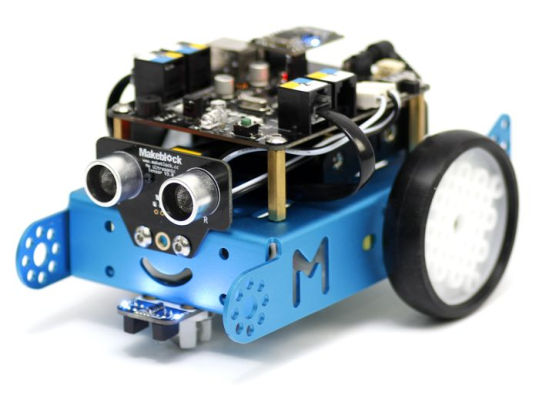 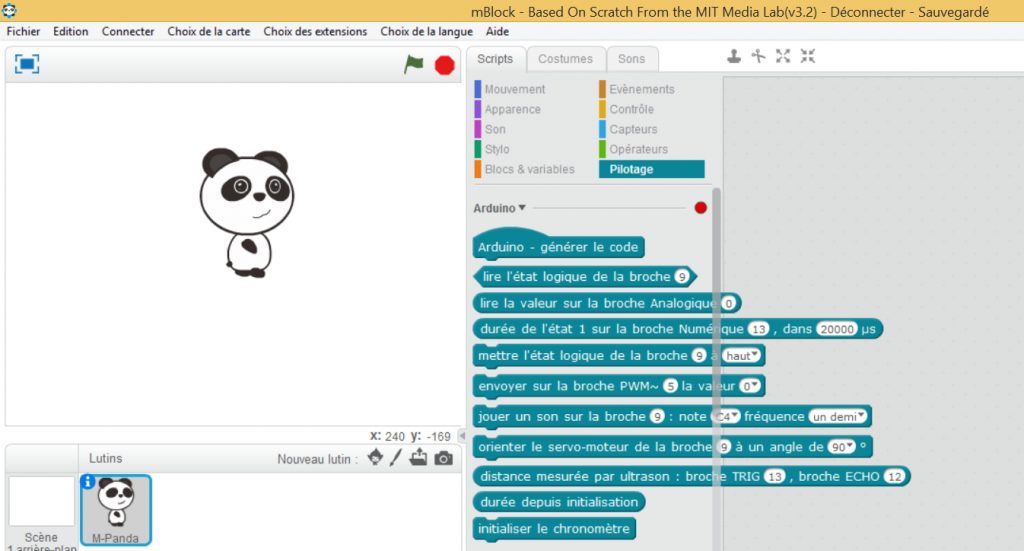 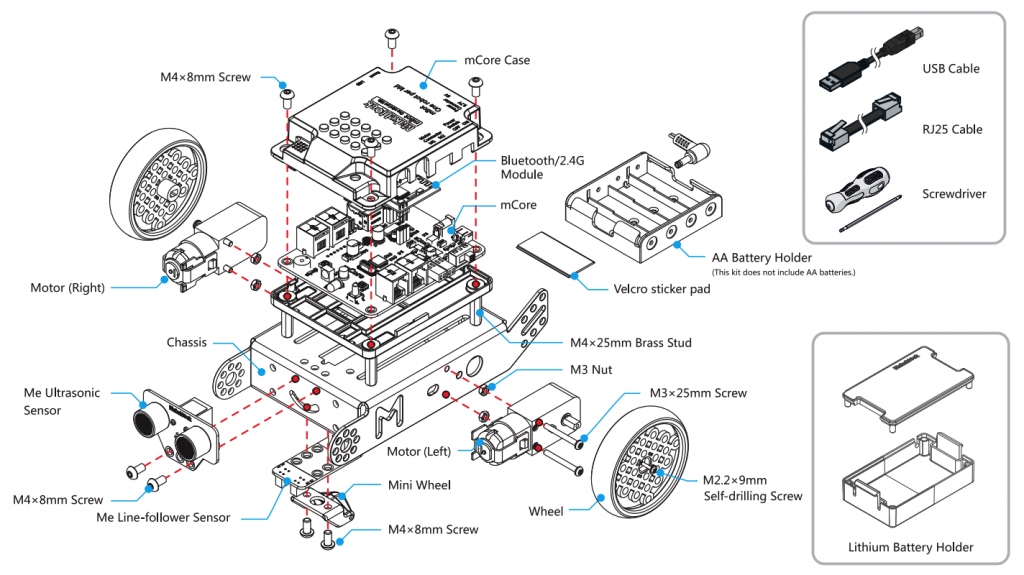