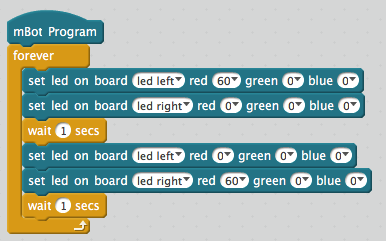 Follow-up of my previous articles (first, second, and third) about my experience hosting a robotic class in a junior high school. Here is a little wrap-up of the fourth session.

For this session, I opened the activities in different directions by proposing new hardware to play with (remote control and led matrix) and leaving the groups full choices on what they wanted to program. The deal was let them build/program whatever they wanted and show it to the other groups at the end of next session. So this session was the first part of a double session.

Kids have been asking to get the remote controls since the first session. I kept them until today because I was afraid that the class would quickly turn wild with kids driving their robot all around the room. Of course, that’s pretty much what happened! The first thing they had to do to use the remote control was to reset the program on the board to default one so that they could use the arrow to drive the robot. Then I told them they could reprogram each key of the remote. That caught their attention and most of the group seemed to enjoy triggering things with the remote (nicer than triggering by pushing the on-board button).

Fixing the Led Matrix on the Robot was fun for all the groups because it was an opportunity to use again the screwdriver! Almost to quick and easy to do, but fun anyway. They the “draw on led matrix” action was very successful because it allows to draw your own custom image on the matrix. This feature is similar to the “draw sprite”one in Scratch using the Paint Editor.

Using both the remote control and the led matrix, several groups ended up this session with program showing different drawings on the matrix depending on the key pressed on the remote. Let’s see what they come up at the end of the next session.