Now that Personal Computers sales seem to have peaked to the profit of iOS and Androids mobile devices, it is worth remembering how this market grew from hobbyists-only to massive market during the 80’s. Apple and Microsoft “wars and peace” made it into many books/documentaries and Steve Jobs and Bill Gates fame is such that we are regularly remembered of their biographies. But at the same time, another battle took place: IBM versus its clones. The documentary “Silicon Cowboys” is telling the story of how Compaq (created in Texas, hence the “cowboys”) entered the market of Personal Computer with a bet on high compatibility with IBM PCs and portability. This is quite a fascinating watch to see “David” Compaq beating “Goliath” IBM in the PC market. An episode I was not totally familiar with is how Compaq and 8 others manufacturers responded with EISA standard to IBM move to launch an “incompatible” PS/2 computer. At the beginning of the 90’s the “IBM PC clones” market was huge and as DOOM (released?) was available on PC, it was about time for the late-teenagers to sell their Commodore/Atari and buy a 486. Unfortunately for Compaq, the market remained ultra-competitive, and Compaq was unable to fight with DELL or unbranded PC assembled in small shops.

Watch “Silicon Cowboys” if you want a nice piece of geek-history!
And if you want to go further on the topic, you might be interested in
– The book written by Rod Canion about the story of Compaq: How Compaq Ended IBM’s PC Domination and Helped Invent Modern Computing (amazon/audible)
– Halt and Catch Fire (loosely based on Compaq history)
– Internet History Podcast episode with Rod Canion 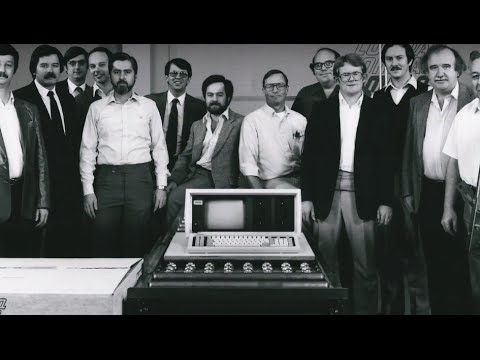